Early start with the three country landscape canvases in the car and over to the Wirral where the fog and heavy mist made for an interesting view from my chosen spot in the field.

The fog was so heavy I decided to work on the third new canvas as a view that included the heavy fog, and wait for the fog and mist to lift before working on either of the other two canvases.

One thing that is always wise when painting with oils is to avoid too much white paint, adding white does not equal a lighter version of a colour, having said that painting fog does mean it’s very difficult to avoid a lot of white paint – but just as the sea is not blue, fog is not white (or grey for that matter)!

As it was the fog stayed for nearly 2 hours and when it lifted, did so in 20 minutes, great to watch, very difficult to paint!

Got to meet during this mornings painting a big dog too, it probably belonged more to the ‘Hound of the Baskervilles’ than in todays painting, I love dogs but this one according to the owner did not like anything new on his daily walks, humans were OK I was told, but new posts etc were a big threat and my easel looks like a post….fortunately the smell of turpentine put the hound off getting too involved with any painting…! 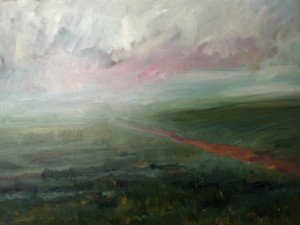 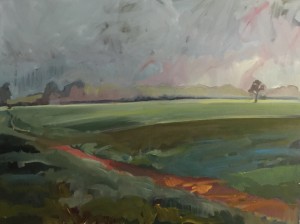